Alpha Travel Insurance > Blog > Thanksgiving Parades worth being Thankful for

Thanksgiving Parades worth being Thankful for

Not in the Holiday spirit yet? Get yourselves over the pond to see our cousins in the USA, they certainly know how to kick off the holiday season!

Thanksgiving parades happen all over America, and millions come out in force to watch, join in the festivities, or spectate from the warmth of their homes on TVs. Huge decorative floats, ginormous character balloons, marching bands, singers and dancers all come together to create something truly spectacular. So if you’re lucky enough to be in the States this Holiday Season, or thinking of it next year, check out some of the best parades across the cities… Of course, we start in the Big Apple with one of the most iconic parades of all time, dating back to the ’20s and attended by over 3.5 million people. The Macy’s Thanksgiving Day Parade takes place right slap, bang in the middle of New York, heading down Central Park West and parts of Manhattan, culminating on the famous 34th Street outside of Macy’s. Expect the most extravagant of floats, balloons, dancers, singers, bands and cheerleaders with performances from Broadway shows and chuck in a load of celebs too. 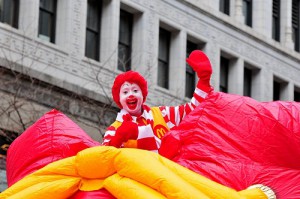 The McDonald’s Thanksgiving Parade is bursting full of famous children’s characters, including the man himself - Ronald McDonald! Beginning in the ’30s to cheer everyone up during the Great Depression, the parade is now a firm holiday tradition, again with the usual floats, marching bands and celeb appearances. In the past, Ronald has brought all his clown friends with him on the parade, although we’re not sure how that will go down this year… 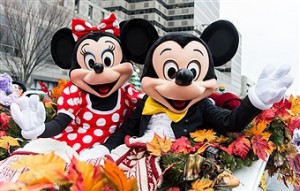 National favourites come together - Thanksgiving and Dunkin' Donuts, for the 6ABC Dunkin' Donuts Thanksgiving Parade. Santa even makes an appearance, in true holiday style, and he's joined by a range of Disney and other characters for the celebrations. Again, expect the absolute works with regards to the bands and performers. Plymouth is said to be the town in which the Thanksgiving holiday originated, and their ‘America’s Hometown Thanksgiving Parade’ celebrates the Pilgrims and earliest settlers in America. A bit less showy than the Macy’s parade, these floats give an insight into America’s heritage and history complete with military bands and even some classic Vintage cars. 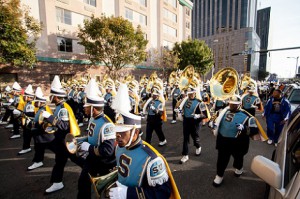 A newcomer to the scene, the Bayou Classic Thanksgiving Day Parade of New Orleans is only a mere 6 years old; this does not mean it is any less impressive. Floats, marching bands and military units will be joined by the Grambling State University World Famed Marching Tigers, Zulu Social Aid and the city’s oldest Carnival Crew who once boasted Louis Armstrong amongst its members, Pleasure Club.